How Tennessee's Taken the Politics Out of Renewable Energy

Its big and small, Democratic and Republican cities are going green. Other states want to know how. 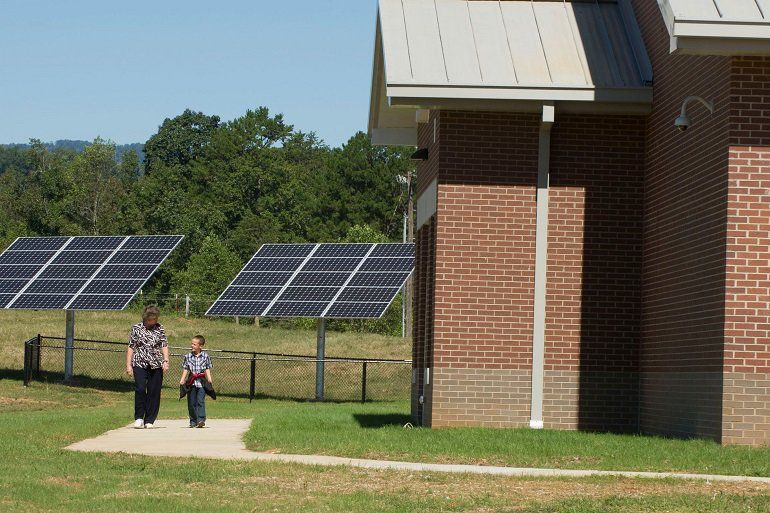 Energy costs are one of the highest expenses schools face today. To offset them, some Tennessee schools are installing solar arrays and geothermal heating and cooling systems. (AP)

When it comes to a particular renewable energy program in Tennessee, it doesn’t matter whether you believe in climate change or not, are a Republican or Democrat, live in a big city or small rural town. The program in question is even neutral on specific technologies, which means it’s up to you whether you install solar arrays or develop biodiesel or put in geothermal at your schools. The only thing you have to believe in is saving money and creating jobs.

That’s the ethos behind the Tennessee Renewable Energy and Economic Development Council (TREEDC), which was formed in 2008 when the University of Tennessee announced a project to develop switchgrass ethanol. The plan was to produce 1 billion gallons across the state, and what better way to do that than by bringing communities together? Nine years later, TREEDC has a membership of more than 100 city and county mayors and businesses. Since the switchgrass ethanol project, the organization has explored solar, compressed natural gas, geothermal and waste-to-energy, among other technologies, says Warren Nevad, director of TREEDC. “Whatever the communities need, we try to help bring it to them.”

TREEDC’s goal is simple: Fast-track renewables in Tennessee. The way they do that is even simpler. TREEDC holds free forums throughout the state to educate members on grants and other opportunities available to them. “I call it speed dating for renewable energy,” says Nevad. “Businesses give quick 15-minute presentations.” Then cities, he says, simply decide whether they like something or not. And if they do, the University of Tennessee provides technical assistance.

TREEDC’s membership ranges from big cities to small rural towns. But it is the latter that TREEDC benefits the most. Smaller jurisdictions rarely have the staff or resources to make energy efficiency upgrades or install solar arrays on public buildings. TREEDC’s model is a viable way for these small towns to make green investments.

Take Dunlap, Tenn. The small town of 4,800 residents is wrapping up an ambitious renewable energy program later this year -- one that it launched after connecting with NORESCO, one of the largest energy services companies in the nation, at a TREEDC forum. Under the program, NORESCO is upgrading water meters and adding new LED street lighting, high-efficiency LED interior and exterior lights at all city buildings, and solar arrays on the rooftops of nine public buildings. “Energy is the second-highest cost to the city; employees are the first,” says Dunlap Mayor Dwain Land, who is also president of TREEDC. “So we just thought from the beginning that [green investments] would ultimately help the city build more infrastructure and hire more employees. Going greener preserves resources.”

The program is estimated to cost about $2.75 million, which Dunlap will borrow and then pay back using the energy savings from the improvements. Land says that the simplicity of the process, which involved NORESCO conducting an audit, submitting a plan of action and then having the town’s board vote on it, will appeal to other small cities. “Dunlap will be a good case study for rural communities across the state to emulate,” he says.

TREEDC itself has already gotten a lot of interest from other states, including Alabama and Missouri. Nevad says it’s an easy program to replicate: All a state or city needs is the support and partnership of a university. “Democrats and Republicans and Independents alike like this program,” he says. “It saves money, creates jobs and just tries to solve problems.”

BY ELIZABETH DAIGNEAU. This article originally published at Governor.com